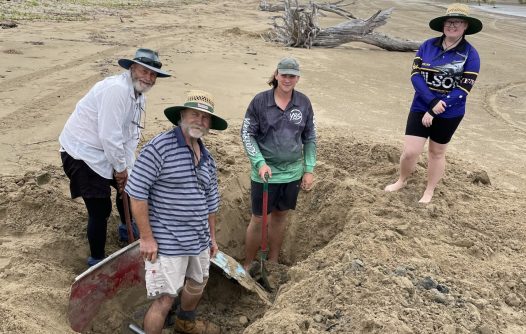 Capricornia Catchments was contracted by the Fitzroy Basin Association to undertake marine debris removal along local beaches from Keppel Sands to Thompson Point. This first round has been completed, with another two day event planned for early 2023.

A great two days of beach clean ups took place on the 8th of May and 7th of June. As the first clean up was held on mother’s day, a special gift was handed out to the mothers that attended the event. Lots of debris was collected by staff, trade assistants and our volunteers. All debris were recorded and weighted, with a total of 496 kgs of debris collected. This area requires beach clean ups at least twice a year, particularly just south of Pumpkin Creek, which worked well having volunteers walk in from Joskeleigh Road. Rundles Beach near the mouth of the Fitzroy has a lot of concrete and metal debris as well as asbestos, which as with past clean up’s here we did not attempt to collect due to the hazardous nature of these materials to participants. We focused mainly on the plastic debris that could potentially go back out to sea and breakup.

Starting from the southern end of Rundle beach near Thompson point, Capricornia Catchments staff worked their way back up to Pumpkin creek collecting 390 kgs of Marine debris. The southern area Size, abundance, weight, and amount of sand semi-burying items made it impossible to remove. However, as removal of debris would be extremely hazardous due to the unstable nature of the terrain, we do believe something should be done to prevent the further break up and leaching of chemicals and particulates from the remaining infrastructure. Glass beer bottles and broken glass pieces were the most frequently found item at the southern end of the clean-up area. Net scraps, rope, and plastic bottles followed, with the majority of the items being found along the rest of the clean-up area. One vehicle was loaded to the maximum with all collected debris from the second day and taken to Livingstone Shire Landfill for disposal.

All days of the clean-up were incident free with a total of 886 kgs of marine debris removed.

Back to News & Updates