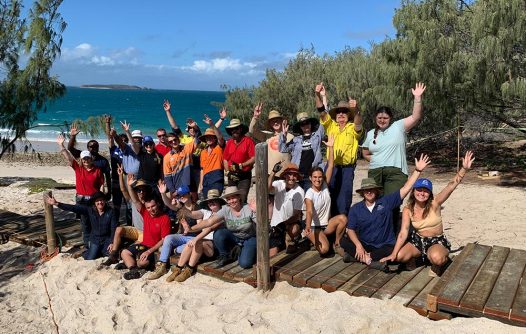 In the early 1990s, Woppaburra Traditional Owners and National Parks Rangers constructed a boardwalk, with support from the then Department of Environment and Heritage Protection. The purpose of this was to protect an Aboriginal midden site from the impacts of foot traffic and the resulting erosion. The midden is of significant cultural value to the Woppaburra People, with artefacts uncovered during archaeological studies of the 1980s dating back hundreds of years. There is evidence to suggest the midden was in use at the time of European contact.

Capricornia Catchments organised a project to demolish and remove of this aged boardwalk that was no longer safe or functional. Great care was undertaken to limit any disturbance to the midden site.  Following the demolition, a new boardwalk, approximately 120 metres in length, was constructed to minimise any damage to this sensitive area.

The boardwalk lies on the traditional land of the Woppaburra People on Great Keppel Island, off the Capricorn Coast in Central Queensland. This is within the jurisdiction of Livingstone Shire Council.

The aim of the project was to preserve an area of cultural and environmental significance to the Woppaburra people and the wider community.  To engage young participants in an opportunity to gain useful skills in DIY/construction, working as a team in a safe environment supported by skilled team leaders and to raise awareness of the environmental and cultural heritage values of Great Keppel Island and the Great Barrier Reef Marine Park, focusing on young people through first hand interactions with Woppaburra elders and Natural Resource Management Practitioners.